This event has passed.

This course takes place every Wednesday across 4 weeks from 7th September to 28th September 2022.

This masterclass explores the ancient artform of shadowgraphy – making moving pictures with your shadow. Sometimes called hand shadows, this may be the oldest form of puppetry, and involves the simultaneous use of a series of skills, including hand-eye co-ordination, ability to visualise shape and form, muscle memory and sense of movement.

In the course of four two hour session participants will learn practical physical warm-ups, general hand positions for making a range of animals and characters, specifics of lighting and screens and suggested contexts in which hand shadows can be used to good effect. There will be opportunities to ask questions and make requests. Many of the skills taught are transferrable to other forms of puppetry, including lip-synching, dynamics and quality of movement and use of the whole body.

Drew Colby has played and worked with puppets since the age of five, becoming more interested in ephemeral forms of puppetry as his career developed, until he began specialising in the ancient art of hand shadows in 2010. Mainly self-taught, his work has toured to theatres and venues on five continents. It has been seen on television in programmes such as Not Going Out (BBC), 8 out of 10 Cats does Countdown (C4), Trust (BBC) and Game of Talents (ITV). His shows have won awards including the 2018 Phoenix Arts Club cabaret award on the West End in London and the audience choice award for Best Show at the 2019 Newcastle Puppetry Festival. Drew came third in Das SuperTalent (Germany’s Got Talent) 2021. He has led masterclasses in the UK, Italy, Israel,  and Turkey. 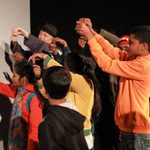 One place on this course will be offered for free as a bursary.

Please CLICK HERE for more information about how to apply.

Be the first to hear about new shows and activities

We use cookies to ensure we give you the best experience of our website. Learn about how we use them.